Summary: RSNA is tracking attendees in the vendors' exhibit areas with RFID tags, with very little notice to the attendees; if you value your privacy, opt out or destroy the RFID tag in the back of your badge.

I rarely duplicate an entire post from something that I have contributed to another forum, Aunt Minnie on this occasion, but in this case I feel strongly enough to reproduce the material in its entirety here.

Last year I got a bit annoyed that RSNA had deployed RFID tags in the attendees badges, for the purpose of piloting tracking attendance in the technical exhibits (i.e., vendor's booths), after Dalai pointed this out in his blog. See "http://www.auntminnie.com/forum/tm.aspx?m=120792". Mostly I was concerned about it not being made very clear to folks that this was going on, rather than because there was anything particularly nefarious about it.

This year, RSNA is again using this technology, and if you look for example at the back of my badge, you can see it taped underneath a label that identifies it: 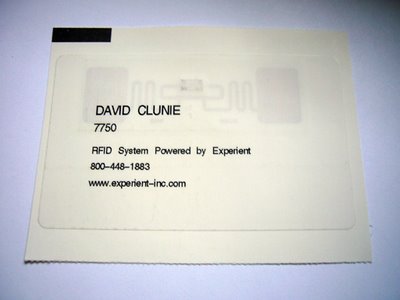 In the RSNA Pocket Guide, the subject is also specifically mentioned, with instructions on where to go to "opt out" if you want: 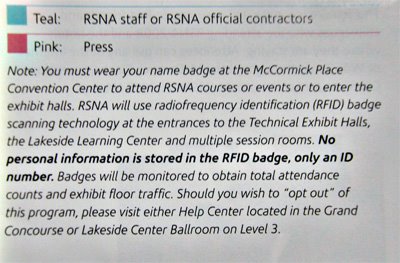 Here is an article for from RSNA 2008 for the exhibitors, entitled "Increasing Revenue with RFID Exhibit Booth Tracking", which puts the objectives in perspective. Note that this is not a totally clandestine effort, and though in my opinion notice to registrants is hardly prominent, it was mentioned in the "November RSNA News", which contains similar text to what is in the pocket guide. What really bothers me is that there seems to be no mention of it at all in the "Registration Materials", at least as far as I can find (please correct me if I am wrong about this).

Now, whilst I am happy for RSNA to know that I attended, and happy to know which scientific sessions I participated in to help their planning, I am not at all happy about providing that information to the vendors. So, whilst I do not yet know what their "opt out" mechanism is, I suspect it is to record your details to be excluded from the reports sent to the vendors (they did that on request last year in my case).

So this year I am going to be proactive and remove or destroy the RFID tag that is in my badge. This is actually easier said than done, because it turns out they are tough little f..rs. The sticky label on the back of the badge will not peel off cleanly. Attacking the chip or antenna with a scalpel reveals that they are very hard, and without any way of confirming that the device is actually no longer working, doing a really good job (e.g., on the chip with a hammer) is going to make a mess of the badge. A Google search on the Internet (see for example, "How to kill your RFID chip") reveals that a short time in a microwave oven does the job, though at the risk of starting a fire, which doesn't sound cool. Also, most attendees won't have a microwave in their hotel room. I tried it on my wife's badge first (!), and when that didn't catch fire, did my own, and whacked the chip with a hammer, nailed it with a punch a couple of times, and cut the antenna. That said, I would still rather peel the whole thing off if it didn't look like the whole badge would tear apart.

Anyway, if you respect your privacy, as I do, then I suggest you find a way to deactivate the device before you go wandering around, and if you forget, make sure to go an opt out to prevent the information being disseminated.

PS. Another thing that bothered me last year was that the signage that notifies attendees that this sort of monitoring is going on was not terribly prominent. I will update this post as I wander around and investigate.
Posted by David Clunie at 9:21 AM

I used an exacto knife to excise the central chip, and just to be sure, the antennae.

Hi
I did not attempt the microwave option!!! However,I was very successful with a ball point pen supplied by the SAX Hotel!!!! Careful color your way around the chip in the center, then poke the pen at one corner of the chip and it simply peels away. The badge escaped without damage!!!!